City of Sydney Councillor Lyndon Gannon talks about his dyslexia

How was your early school experience?

I can vividly remember the first time a teacher called me pathetic in front of the class for not being able to read. I was about 6 or 7. I was understandably stunned; I mean what sort of a person calls a little boy pathetic?

Apart from the reading side of things, and concentration issues, I was a bright and happy kid who enjoyed going to school. Some experiences early on, and the level of support and understanding of dyslexia within the schooling systems definitely set my academic trajectory.

How did you find out you had dyslexia?

Through my parents’ persistence. From what I recall my primary school didn’t want to engage with specialists to diagnose me – it was a small public school with limited resources in an area with many disadvantaged kids – they probably thought I was a just a bit thick!

Eventually the tests were done, and the result was clear as day – as my parents had been saying all along.

How did you feel about the diagnosis?

I had no idea what it meant at the time. I still remember being thinking ‘Does this mean I no longer have to come to all these meetings with old people talking about how my brain is wired differently?’.

I was soon to discover that it actually meant a hell of a lot of hard work.

I didn’t like that one bit. Thousands of hours of extra reading work.

Luckily my family was fortunate enough to be able to afford classes with a speech pathologist. Without that, and the continued support of my family, my life would look very different now.

How did you navigate high school and / or any further education?

High school was much more fun. Afterall no one had high expectations academically of me, so I didn’t have that pressure. I excelled at sport, playing representative AFL and Rugby League, which I really enjoyed and allowed me to grow outside of the classroom.

It was also in high school that I started to ‘get by’ academically. All those thousands of hours had paid off. I even started to like reading. I didn’t get one of those inspirational teachers that some people talk about, I found Charles Dickens’ Great Expectations on my mothers’ bookshelf – that was a turning point for me.

Uni was like primary school all over again. There are all the complexities of starting uni: transitioning from high school, becoming an independent adult with a job, forming new relationships, adjusting to the university academic style etc.

I bombed my first year. Not through disinterest – I went to all my lectures, and other people lectures too – because I loved learning. But because of absent fails for not attending enough tutorials. I was petrified of being asked to read aloud something I wasn’t familiar with. Out of necessity I learned to deal with it over the years, but very rarely contributed to class other than the bare minimum.

How does dyslexia help or hinder you now?

After finishing school, I worked as a council street sweeper. Now I am a Liberal Councillor at the City of Sydney, working full time (essentially as a technical writer!), and I am working to open a few rooftop bars.

I am the way I am because I am dyslexic. I am very happy where I am and I’m excited to see where life takes me. I still have a big fear of public speaking, and reading aloud, but I work at it… I kind of don’t have a choice now being a politician!

If you could give your dyslexia back would you?

A dyslexia champion is a person who helps and supports people with dyslexia to understand dyslexia and how to navigate around it. Was there a particular champion in your life or did you work things out for yourself?

Unfortunately, not. I must’ve been in my late teens when I first met someone who openly said that they were dyslexic. It was never talked about outside of my house.

What would you like the general public to know about dyslexia? Do you think it’s well understood?

My mates get a kick out of the way I write things (letter soup most of the time!) and get frustrated when ask ‘how do you spell…’ a million times when playing scrabble.

The public should know that being dyslexic doesn’t mean someone is less intelligent. All it means is that their brain is wired a little differently. One of my examples is that I came top of my class in high school for technical drawing, and near bottom of my class in English. I spent hours reading and writing to pass English and did no practice or study for technical drawing. It’s just how my brain works.

It is not well understood. That’s why the work Code Read does is so important.

Do you have a message for education ministers and policy makers?

Dyslexia will affect everyone differently. Identifying it early and supporting those to maximise their potential will pay dividends in the long run. Ignoring it will only make people less productive and stigmatize those with it.

I’d be interested to know the stats of young people in juvenile detention with dyslexia, and the general prison population more broadly. I suspect there would be an overrepresentation. This is completely understandable due to the trajectory people are put on from an early age, especially young men from disadvantaged backgrounds.

What message would you have for teachers?

Be patient. I know it will be extra work for you, but it could make a huge difference on a young person life.

What message would you have for young people who have dyslexia?

There is no substitute for hard work. It will be a long, hard, and tiring road but you will get there. In the end your success will be determined by you.

Do you use any particular technology in your day to day life to help with your ‘letter soup’?

The only thing I use really is the spell check function in word/office. It’s a lifesaver.

I remember one time when I was with my speech pathologist and she noted to my mother after the session that I had said ‘I knew it was wrong but I knew that autocorrect would change it faster than I could delete and re-type’. That was a sign of a little breakthrough because I could identify the fault in a word, and knew the correction would be automatic.

But it gets tricky when I type up words like principle and principal, because they are so close – often I still need to right click and hover over synonyms to find out which one it’s meant to be. 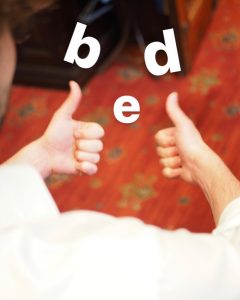 Learning the thumbs up trick for b’s & d’s

You’d likely get a laugh if I posted my answers the way I had typed it, without spellcheck, that lifechanging piece of software, just so you could see and get a taste of my ‘alphabetic soup alle phonetics’. I’m not even remotely ashamed anymore. I gave up caring the day I learnt the ‘bed thumbs up trick’ to remember which way b and d goes… it was the same day that I discovered you spell fone with a ‘ph’!